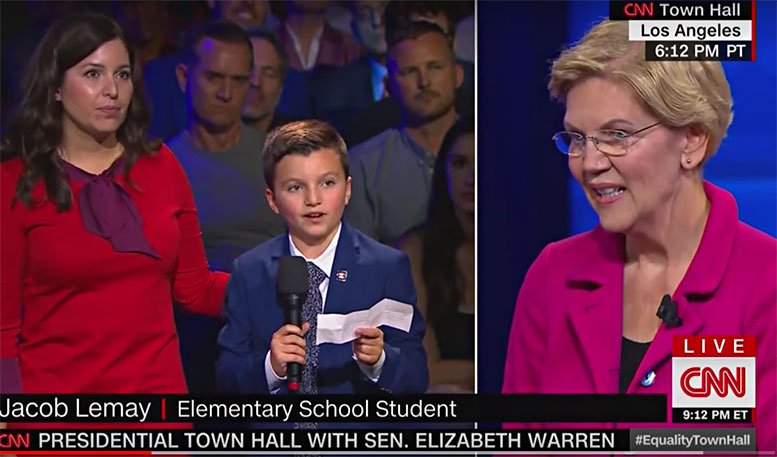 LOS ANGELES—Recently, at a CNN Presidential Town Hall with Elizabeth Warren in Los Angeles, moderated by Chris Cuomo, a 9-year-old transgender child showed their activism and concern for simply being allowed to live their lives fully at school, merely focusing on his homework and being a student.

What will you do in your first week as President to make sure transgender children feel safer in schools?

Her answer is one “for the books,” as she explains, with full knowledge of transgender issues, while placing the blame on Betsy DeVos’ inhuman rulings against the transgender community, what she’ll do, which also will involve Jacob when she “is elected,” she said.

Senator Warren, whose lead in the campaign has grown, is known for her candor and stances about many issues that marginalized communities face today in America. In a recent Op-Ed sent to The Rainbow Times, she addressed bullying that Trans and LGB students face and how she’ll tackle these issues.

“As president, I’ll fight to make sure every LGBTQ+ student has an equal opportunity to thrive. I’ll start by amending the Elementary and Secondary Education Act to require school districts to adopt codes of conduct that specifically prohibit bullying and harassment on the basis of sexual orientation or gender identity. I’ll also direct the Education Department to reinstate guidance—revoked by the Trump Administration—on transgender students’ rights under federal law. And I’ll make clear that federal civil rights laws prohibit anti-LGBTQ+ discrimination like discriminatory dress codes, banning students from writing or discussing LGBTQ+ topics in class, or punishing students for bringing same-sex partners to school events.

Regarding LGBTQ youth and people of color, Warren spoke about how the Trump Administration has used religion as a means to hurt, harass and bully others who are already marginalized. In one of the bullet points in her release, she spoke about such “weaponization” of religion under Trump.

“We also must prevent the weaponization of religion to discriminate against or harm LGBTQ+ people. The freedom of worship is a core American value. But the Trump White House has weaponized the language of religion by giving federal agencies, government contractors, and grantees a license to discriminate against LGBTQ+ people, as long as they claim they discriminated for a religious reason. Religious liberty should not be used to shield bigotry. As president, I would fight to pass the Do No Harm Act to return the Religious Freedom Restoration Act to its original goal of protecting religious minorities and further clarify that this law can’t be used to harm LGBTQ+ people.”

To find out more about her stances and plans (just released this October by The Rainbow Times) on the trans and LGB community, click here. To watch the full video, click here.

Testosterone: What I Wish I Knew Before My 1st Shot

Top Surgery 8 Years Ago & What's Next

Shapeshifters Custom Garments Are For All

FTM Pop Artists To Check Out